Warning: Parameter 2 to wp_hide_post_Public::query_posts_join() expected to be a reference, value given in /home/customer/www/savoryandsour.com/public_html/wp-includes/class-wp-hook.php on line 308
 Ski Queen Cheese Looks and Tastes Like a Giant Caramel Chew Skip to content

I’ve always seen Ski Queen cheese sitting on the gourmet cheese rack at the grocery store, but never bought it. It’s time to finally see what this little red block of cheese is all about.

The original version of Ski Queen cheese was said to be created in 1863 by Anne Hov. Cheese made from whey was common in Norway but she was the first one that had the idea of adding cream to the cheese.

Today, it is marketed in the US as Ski Queen. Why Ski Queen? It is very tolerant to temperature changes and is full of energy (aka it’s fatty), making it a popular trail snack for Norwegian cross-country skiers.

Ski Queen cheese is considered a brown cheese, or brunost. Brown cheeses are made with concentrated whey and get their color from the caramelization of the sugars in the milk during the cheese-making process. Ski Queen is made with cow’s milk whey, cream and goat’s milk.

The particular variety I’m trying this week is made by Tine, Norway’s largest producer, distributor, and exporter of dairy products. 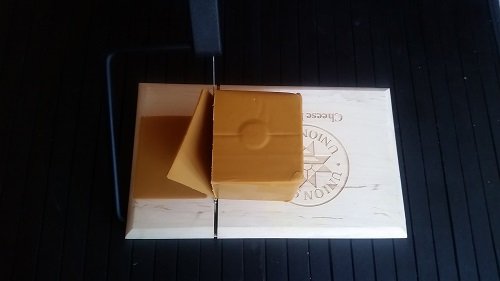 This cheese makes me happy I started this cheese-discovery journey. I never thought cheese could taste like this.

Right out of the package, Ski Queen looks like a giant caramel chew. Like exactly. Its smell reminds me a lot of how Juusto smelled, cheesy but it also has a toast-like “browned” smell.

The taste is especially unique. First you get a very Juusto-like bread cheese type of taste, then you get the sweet caramel flavors. And when I say caramel flavors, I mean it tastes exactly like caramel.

The texture starts off caramely-soft but doesn’t stick to your teeth like actual caramel does. It’s very similar in texture, appearance, and taste (to a lesser degree) to fudge.

After you get the cheesy and sweet flavors, Ski Queen finishes with a strong, tangy, almost dry bite. This tang mellows away quickly as you swallow. A complex cheese indeed!

Beware, this stuff is RICH. All I ate was a thin slice and I’m happy with that. This definitely isn’t a “serve in chunks” cheese so slice thinly.

Overall, I like this cheese but like the Wensleydale I had in week 13, it is almost too sweet and rich for me. A little goes a looonnngg way!

Replace the cheddar with 2/3 cup grated Ski Queen in this Apple and Cheese Pie recipe for a unique dessert.

Because of the soft, sweet, richness to Ski Queen, it pairs phenomenally with salty crackers and other savory foods alike. You can also go the complimentary route and pair with other sweet foods and drinks.

In Norway, Ski Queen and other brown cheeses are regularly eaten with breakfast.

Next week I’ll be trying Mimolette Extra Vieille so be sure to check that out!