Warning: Parameter 2 to wp_hide_post_Public::query_posts_join() expected to be a reference, value given in /home/customer/www/savoryandsour.com/public_html/wp-includes/class-wp-hook.php on line 308
 Wensleydale Cheese Review - Cheese a Week #13 Skip to content 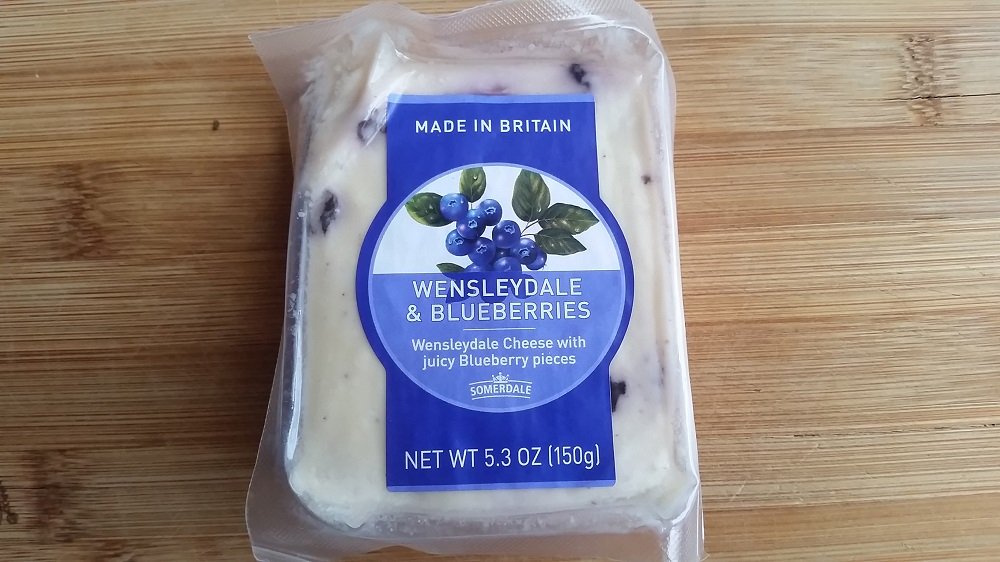 I was at Sendik’s Market this week and picked up a couple new cheeses, one of which was Wensleydale cheese with blueberries. I’ve never heard of Wensleydale and I’m excited to try it for week 13!

Wensleydale cheese is named after its place of origin, Wensleydale, North Yorkshire, England. It was first made by French Cistercian (a religious order) monks who settled in the Yorkshire Dales around 1150 AD. These monks used sheep’s milk and mold to create Wensleydale cheese, which was actually first a blue cheese. The recipes for this cheese were passed along to farmers’ wives after the dissolution of the monasteries in the late 1530’s.

By the mid 1800’s, cow’s milk was used instead of sheep’s milk to make the cheese. In addition, the industrial revolution had caused the style of the cheese to be altered. It was no longer brine-washed, it was harder, and it was sold when it was still white and absent of mold. Farmhouse-style Wensleydale cheese mostly disappeared.

Today, Wensleydale cheese has officially received protected status as originating from Yorkshire by the European Union.

This particular Wensleydale cheese that I’m trying this week is made by Somerdale International in the UK, who is the leading exporter of British cheese to the USA.

Rich. That’s what this cheese is. It’s like eating a slightly undercooked blueberry pancake with a tab of butter on top (I mean that in the best way possible). It’s sweet and creamy and the blueberry comes through strong. This Wensleydale is the sweetest cheese I’ve tasted so far, but it also finishes with a subtle tang.

Eating Wensleydale with crackers, crusty bread, and other savory foods I think make it taste better because of the contrast of sweet and savory.

Try Wensleydale cheese in this mouth-watering leek, ham hock and Wensleydale gratin recipe (about halfway down the page).

Wensleydale cheese is suited to be paired with sweet things, which is why this particular cheese is made with blueberries and why this type of cheese is often made with cranberries as well. However, I think the blueberries add enough sweetness to this cheese and that savory foods would complement it even better.

Next week I try mobay cheese, which is actually two cheeses in one!