Warning: Parameter 2 to wp_hide_post_Public::query_posts_join() expected to be a reference, value given in /home/customer/www/savoryandsour.com/public_html/wp-includes/class-wp-hook.php on line 308
 Regular Salts vs. Specialty Salts - A Guide to Flavors and Best Uses Skip to content 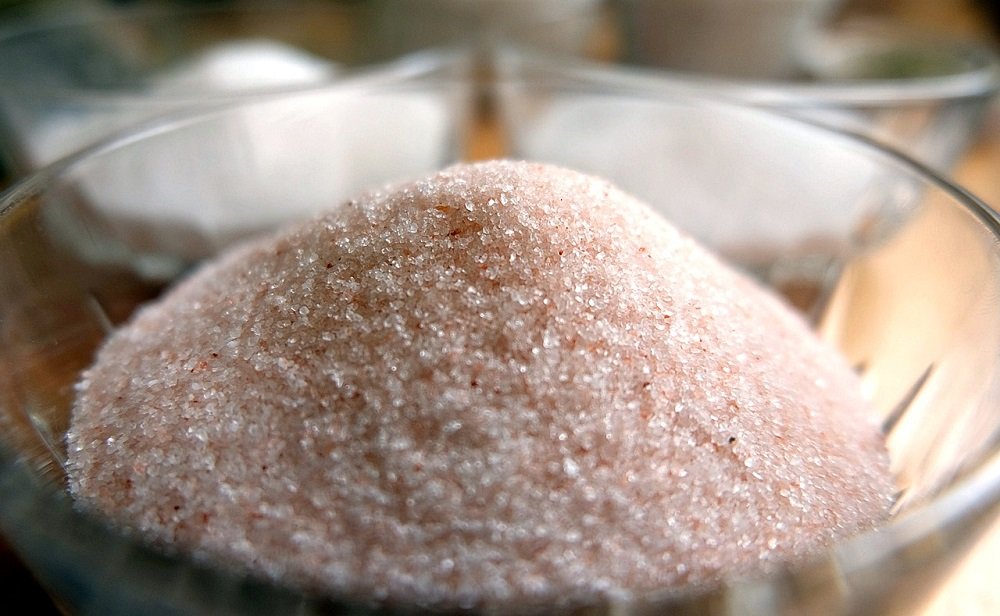 Salt is an incredible mineral. It has been used for ages to extend the life of food. Salt-preserved foods enabled explorers to venture further into new lands. It is also an essential nutrient for human life. Salt helps regulate blood pressure, water distribution, nutrients to cells, nerve transmission, and muscle movement. Although it has such a huge effect on the human species, salt’s use as a food flavorant is probably what it is known best for.

Salt has the ability to minimize bitterness, balance sweetness, and enhance aromas by unlocking aromatic compounds. It has its own flavor as well. It can balance out a dish all in itself.

When using salt for cooking and preserving, deciding between several kinds of regular and specialty salts can be a bit overwhelming.

First, one word of caution: when a recipe calls for a specific type of salt, it is best to use that type of salt. Different salts can have drastically different densities and “saltiness.” Not using the called for salt may result in a dish that is much too salty or not salty enough. However, the less salt that is required in the recipe, the less difference it will make if you use a different type of salt. In any case, you should taste as you are cooking and add salt little by little until you get that “pop” of flavor.

All three shapes of salt can be used during cooking without much difference in final flavor, assuming they are of the same variety.

There are really two reasons you would want to take salt shape into consideration. One reason is texture when finishing a food with salt. Coarse salts really shine when an added crunch of texture is desired. Whether it’s salted caramels, sliced tomatoes, or a salad, a bigger salt crystal can add a whole other dimension to the final flavor. This is especially true of certain flaky specialty salts that are more delicate than coarse grain salts. They add a nice little crunch while not being too grainy between the teeth. More on flake salts below. Of course if the crunch isn’t desired, use a finer salt.

The other reason shape matters is dissolve time. Smaller, finer salt grains will dissolve quicker and vice versa. For this reason, coarse salt is often desired for cheese making. In a brine or broth on the other hand, a smaller salt grain would be more desirable.

Prior to the 1920’s, much of the Midwestern population of the U.S. was iodine deficient. This was due to iodine being most naturally prevalent along coastal areas and hence in seafood, which was not as commonly eaten in the Midwest. It was found that iodine supplements could prevent and/or cure goiters, certain mental impairments, and hypothyroidism that were more common in the Midwestern states.

To help decrease the prevalence of these medical issues, there was a push to fortify salt with iodine to help supplement people’s diets. The addition of iodine to salt has been successful in reducing iodine deficiency around the world.

So, do we still need iodized salt? It can be helpful, especially for pregnant women. But, if you commonly eat vegetables, dairy, and seafood you shouldn’t need to supplement your diet with iodized salt.

Additionally, the iodine in iodized salt can actually inhibit the desired bacterial growth in cheese making and other fermented foods. It can also add an undesirable metallic taste.

So, don’t buy iodized salt unless you think you need iodine!

Here’s a breakdown of ordinary salts and specialty salts and when to use each:

You’ll probably be familiar with the following salts. They are the ones we are most used to seeing and using in the kitchen. They are cheap, versatile, and are best used for everything during cooking except finishing (more on that below). 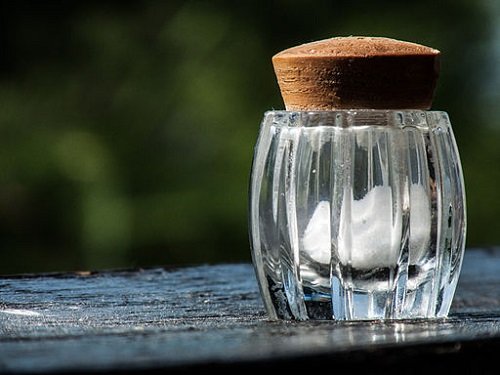 Table salt is highly processed and very close to pure sodium chloride. Most of the minerals have been stripped away during processing. Usually, there is both iodine and anti-caking agents in table salt as well, which can add an undesirable taste. Don’t use table salt unless you need iodine. Anti-caking agents in some table salts can also cause pickled food brines to be cloudy.

Method of production – Crystalized in an enclosed vacuum chamber. 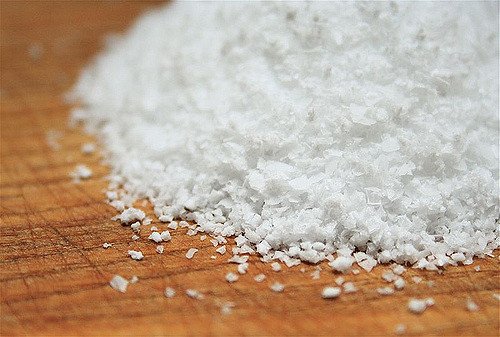 Kosher salt gets its name from traditionally being used during the meat koshering process. Meat koshering is the process of removing blood from meat and making it fit for consumption under Jewish dietary laws. Kosher salt usually doesn’t have any additives like table salt does. The grains are also larger than table salt grains.

Method of production – Depends on brand. Diamond Crystal salt is crystallized in an open container. Morton salt is evaporated in a closed vacuum chamber and crushed into flakes.

The lower density of Diamond Crystal salt allows it to dissolve quicker than other salts as well, which makes it better for quickly cooked foods. A faster dissolve time means it will get absorbed deeper into foods faster, resulting in a more thoroughly salted food.

Refined sea salt has a more intense flavor than kosher due to additional minerals being present.

Method of Production – Ocean water is very quickly evaporated in a vacuum, resulting in crystallized cubes.

Shape – May be coarse or fine, depending on brand.

These specialty salts are essentially unrefined and minimally processed sea salts. Some can take up to 5 years to harvest due to the natural, slow rate of evaporation. Of course, this makes these specialty salts more expensive. Really, the only time you should use these salts is for finishing, when a subtle crunch and unique flavor is desirable. 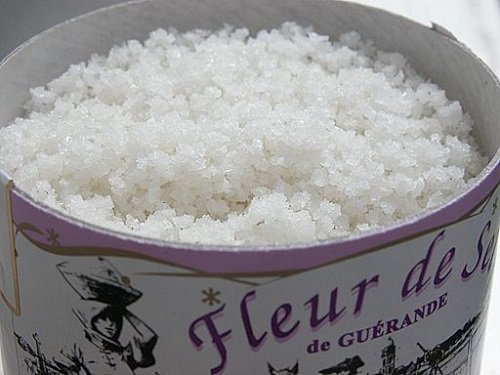 Fleur de Sel is harvested in the Guérande region of western France. This is the premier salt used for finishing food. It is quite fancy and expensive and is known for its aromatics, delicate crunch and high moisture content. A high moisture content means it will remain on the surface of food and on your palette for longer than drier salts.

Method of Production – Sea water is slowly evaporated from pools and the resulting flakes are gently raked off the surface. 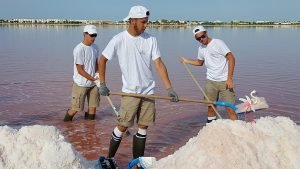 Sel Gris is basically Fleur de Sel with minerals. It is relatively lower in sodium than other salts, with NaCl levels of about 94%. It is also relatively high in moisture content. Sel Gris is produced in the Brittany region of western France.

Method of Production – Slow-evaporated sea salt crystallizes with minerals from the surrounding clay as it sinks below surface. The gray color comes from the clay. 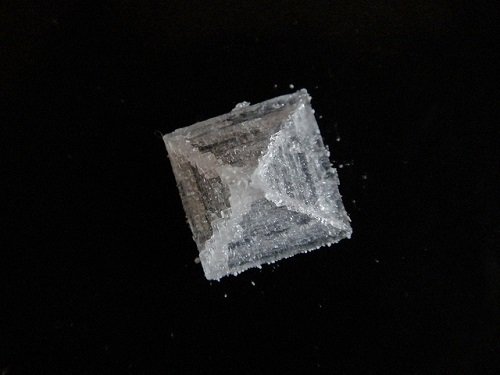 One grain of Maldon. Photo by Amanda Slater

Maldon salt is produced in Maldon, a town in Essex in the UK. Like Fleur de Sel, it is also known for its unique flavor and interesting texture.

Method of Production – Collected from brackish, estuary waters, then heated and cooled in salt pans and raked. Similar to Fleur de Sel.

Some of these can also be considered specialty salts for finishing dishes, and some are used for totally different purposes:

Real smoked salts are cold smoked and can add an amazing smoky taste to a dish without having to grill or smoke the actual food. Smoked salt on baked salmon, for example, can take the flavor to another level.

This, actually pinkish, salt is Indian in origin and has a sulfuric aroma and flavor that can add a unique taste to food. 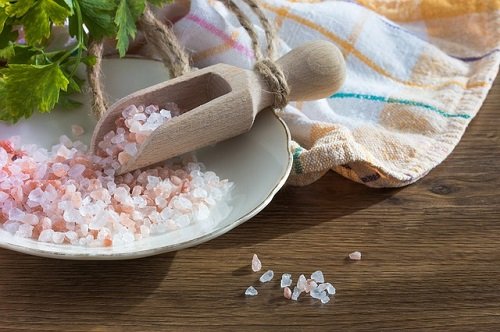 Pink Himalayan salt is mined from the foothills of the Himalayas (obviously). It gets its pink color from iron and minerals found in the rocks.

Rock salt is mined from underground salt deposits by flooding them and quickly evaporating the water. It can be used for anything from making ice cream to salting roads, to seasoning food.

This type of salt is obviously used for pickling and canning as well as for fermentation. It works well with these types of food preservation due to its purity and fine grain size, which helps it dissolve quickly into brines.

Hawaiian sea salt can be found in red and black versions. The red version gets its color from iron oxide found in volcanic clay. 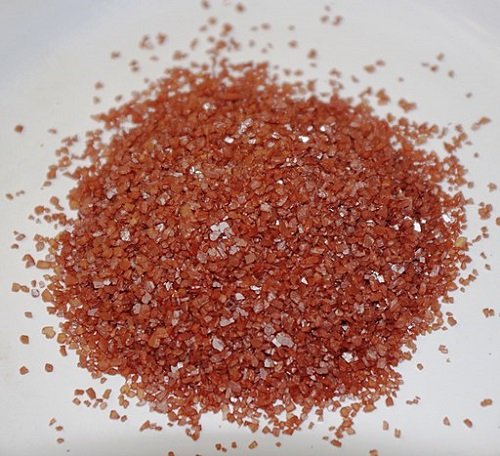 The black variety gets its color from the addition of activated charcoal. Both varieties are typically used in traditional Hawaiian food. 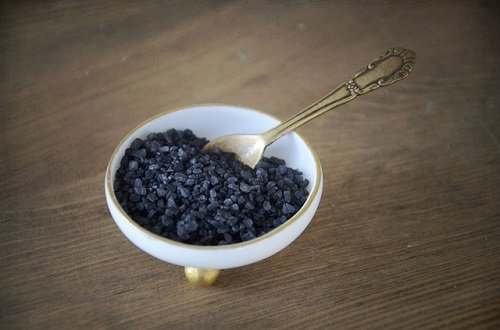 There are so many salts available out there it can be hard to choose just one. Professional chef and bestselling author Samin Nosrat recommends buying two kinds of salt. One cooking salt, like Kosher, to use for everyday cooking and one of the specialty salts to use for finishing. I highly recommend reading her book, Salt, Fat, Acid, Heat, for more information on how to best utilize salt in cooking!