Warning: Parameter 2 to wp_hide_post_Public::query_posts_join() expected to be a reference, value given in /home/customer/www/savoryandsour.com/public_html/wp-includes/class-wp-hook.php on line 308
 Alcoholic and Lactic Acid Fermentation in Food – A Primer Skip to content

We eat plenty of fermented foods in the U.S. and around the world. Many foods are fermented that you may not even be aware of. Cheese, yogurt, bread, beer, wine, soy sauce, salami, and sauerkraut (recipe here) are just a few common fermented foods. Pickles are often thought to be fermented but more often than not they aren’t. Distilled liquors and coffee utilize fermentation in the production process but the final product is not considered fermented. Foods that are considered fermented however, have a lot of benefits.

These foods preserve well, are flavorful, and even beneficial to our digestive systems. Fermentation as a way of preservation has been around since almost 10,000 B.C.!

There are two types of fermentation that are used to produce most of these delicious foods: alcoholic and lactic acid fermentation.

Lactic acid fermentation (aka lacto-fermentation), is one type of fermentation through which foods like cheese, yogurt, sauerkraut, and these delicious pickled Brussels sprouts are made. 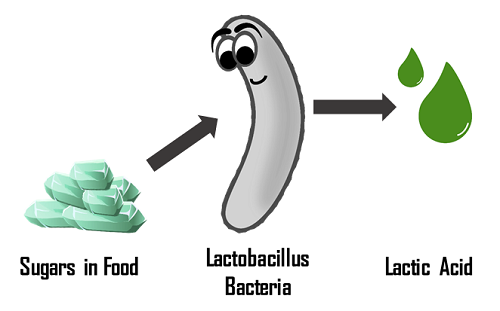 In these foods, lactic acid bacteria (commonly lactobacillus) transform sugars into lactic acid. This buildup of lactic acid can be very apparent in foods like sauerkraut, yogurt, and these tangy fermented jalapeños, for example.

In heterolactic fermentation, ethanol and carbon dioxide are also produced:

To make most lacto-fermented foods, salt is usually required in some amount. The primary purpose of using salt in lacto-fermentation is to add flavor, draw out moisture, and to keep the lactic acid bacteria from multiplying too quickly. Salt can also suppress the growth of some undesirable organisms. So if salt is not added, the final product will probably taste pretty awful. Also, remember that it is important to use the right type of salt.

Another important step of lacto-fermentation is to starve the food of oxygen. Lacto-fermentation is anaerobic, meaning the bacteria don’t need or want oxygen to transform the sugars into lactic acid. Keeping oxygen out of the equation creates a safe-haven for lactic acid bacteria to do their thing without interruption from molds and other undesired organisms. 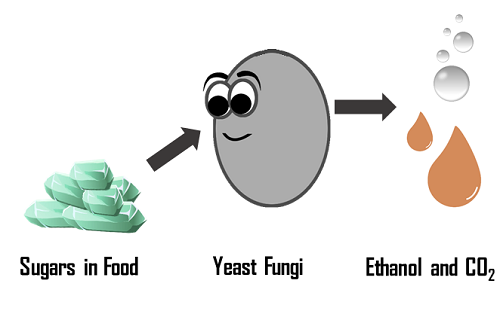 Like lacto-fermentation, the organisms (yeast in this case) consume sugars but instead of producing lactic acid they produce ethanol and carbon dioxide.

Carbon dioxide is what is responsible for making bread rise. 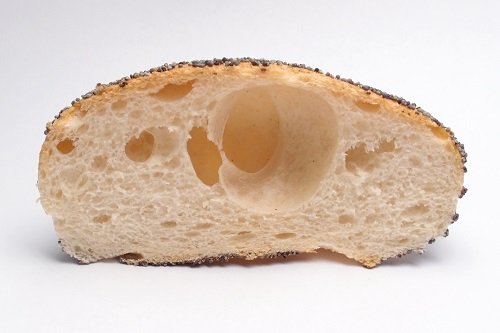 It is also responsible for the carbonation in real Champagne. 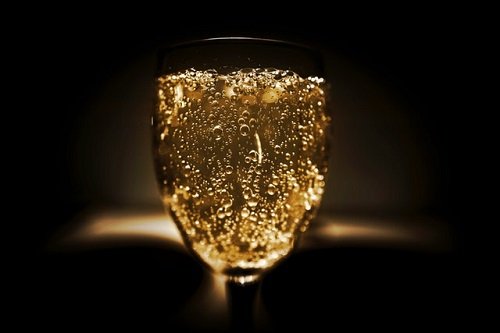 The ethanol produced is what makes beer, wine and champagne alcoholic.

Not all fermented foods are made by these two methods but they are the most common. Sourdough bread, for example, is made by a combination of both yeast and lacto-fermentation.

Vinegar is produced through acetic fermentation. Acetic acid is a byproduct and is what gives vinegar its super sour taste. Stay tuned to follow my adventures in making vinegar!

From a top level, both alcoholic and lactic acid fermentation use tiny organisms to transform sugar into other products. The difference between the two lies in the products they produce and the organism used to do the work. No matter the type of fermentation, these foods are delicious. They are good for your gut and keep well on the shelf and in the fridge. They are an ancient art form and will probably continue to be for centuries to come.