Warning: Parameter 2 to wp_hide_post_Public::query_posts_join() expected to be a reference, value given in /home/customer/www/savoryandsour.com/public_html/wp-includes/class-wp-hook.php on line 308
 How is Cheese Made? - The 6 Step Process Skip to content

I’ve always been interested in how plain old milk is turned into cheese. And I’ve wondered, what exactly is done differently to make two distinct cheeses like Mozzarella and Blue cheese?

There are several steps in the cheese-making process; what is done during each has an impact on the final taste and type of cheese. So how is cheese made you ask? Let’s break it down: 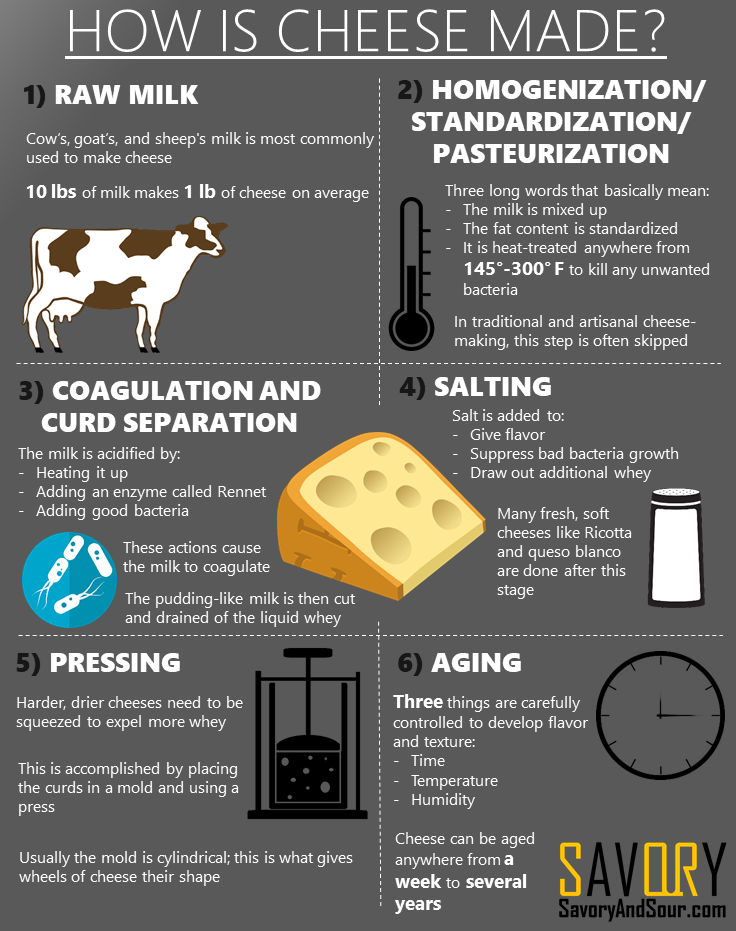 Many animal’s milk can be used to make cheese. Buffalo, sheep, and goat’s milk are the most popular alternatives to cow’s milk.  Most cheeses can be made with milk from any animal but the final product can turn out quite differently from animal to animal. This is due to several things, including fat, protein, and lactose content.

Milk homogenization is the process of making milk uniform throughout. Basically, it’s a high-tech way of mixing the milk. If milk is not homogenized, a layer of cream (in cow’s milk) will rise to the top if left to sit. If you bought milk that isn’t homogenized, you would have to shake the milk every time you pour yourself a glass.

In a nutshell, homogenization just ensures the milk is very well pre-mixed so the fat will not separate on its own.

In the commercial industry, milk is also commonly standardized. This is the process of adjusting fat and protein levels to increase the final cheese yield. This is done because cows rarely produce milk with consistent levels of fat and protein throughout the year.

Standardization is also done to bring the fat and protein levels to the legal required percentages for specific types of cheese.

Three ways of adjusting fat and protein levels in the milk are as follows:

Next, milk needs to be pasteurized to eliminate any harmful bacteria. 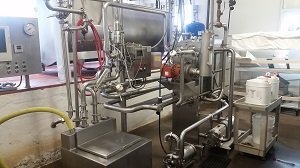 Pasteurization is the process off heating the milk to kill off any unwanted bacteria that may be present. Nasty bacteria like E. coli, salmonella, and listeria can sometimes be present in raw milk. To get rid of any of these bacteria, the milk is heated anywhere from 145 to 300 degrees Fahrenheit. Usually, it’s on the lower end of that range.

The FDA warns against the dangers of using or drinking raw milk. They claim that pasteurizing milk does not reduce the nutritional value of milk. They also warn to not eat any yogurt or soft cheeses made from unpasteurized milk.

If I’m making cheese I will play it safe and use pasteurized milk, especially since it doesn’t seem to have any major affect on the nutrition or taste of the milk and therefore final cheese product. 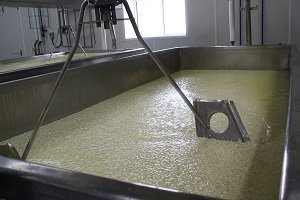 For milk to make its transformation into cheese, it needs to coagulate. This is done by acidifying the milk. When milk becomes acidic, the proteins (caseins) clump up and form curds. This can happen naturally if you let milk sit out long enough, but there are three ways to speed the process up. 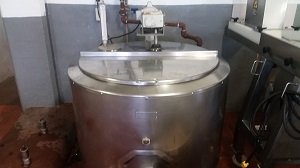 Milk vat where rennet and starter cultures are pre-mixed

At this point, some cheeses like cheddar will have a dye added to produce that characteristic orange color.

After the milk is heated and the starter cultures and rennet are added, the solution is left for a certain amount of time. The milk should then achieve a yogurt-like consistency.

Separating the Curds and Whey 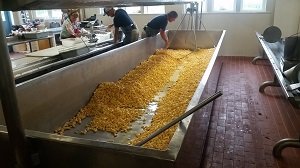 After the milk has coagulated, the solid curds will have separated themselves from the liquid whey. At this point, the whey needs to be drained off.

This is done by first cutting the solid mass of curd into smaller curds to allow more whey to be expelled. The smaller the curds are cut, the more whey will be expelled.

After the curds are cut, they are usually gently cooked in the whey to release even more whey and harden the curds a bit.

Finally, the curds are separated from the whey and left to drain in a colander or pressed into a mold, depending on the type of cheese being made.

Salt is such an important ingredient in cheese making. It has three major purposes. One is to add flavor. Another is to suppress bad bacteria growth.

On some cheeses, the salt suppresses bad bacteria by aiding in rind development. Salt accomplishes this by drawing moisture to the surface of the cheese, which then evaporates and leaves behind a thin layer of dehydrated, hard cheese.

The third reason salt is added is to draw out even more whey from the curds.

Salt is added at different stages in the cheese making process. Some cheeses are brined; meaning they are bathed in salt water. Some are just salted as curds. Many are salted through a combination of both techniques. 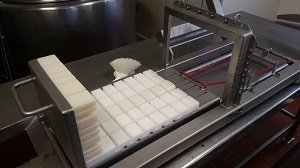 Cheese cutter that cuts large blocks into smaller ones

Many fresh cheeses are essentially done after the whey is drained off and the curds are salted. This includes cheeses like ricotta, mascarpone, and queso blanco. Harder cheeses though, require pressing.

Pressing is the process of molding the cheese into the desired final shape. Usually it is either pressed into a wheel or a block.

Most of the time, pressing is accomplished by placing the curds into a mold and using a cheese press to squeeze whey out. The amount of whey that is pressed out is key in determining the final consistency of the cheese.

The cheese may also be cut into smaller blocks before it begins to be aged.

Aging is the last and probably most important step in developing the final flavor of the cheese. The temperature and humidity are carefully controlled during this step for a specific amount of time. The combination of these three variables allows the cheese to continue fermenting and developing flavor.

Additionally, further measures are taken on certain cheeses to encourage flavor development. Some cheeses are washed (limburger), coated (brie), or injected (blue) with certain bacteria or brines to encourage mold blooms on the rind and inside the cheese.

The aging process can take anywhere from a week to several years. The important thing to remember is that the slightest change in process can produce drastically different results. Sometimes these “mistakes” can result in new delicious variation on an old classic. 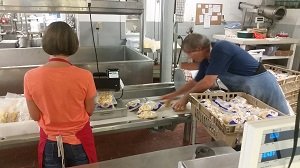 There are pretty much endless possibilities when creating cheese and if you can think of it, it’s probably been done. There are smoked cheeses, marinated cheeses, herb and spice coated cheeses, tea-infused cheeses, the list goes on and on. These types of cheese will have special steps inserted variously in the cheese making process.

After the cheese’s flavor, texture, and appearance develops to standards, it is packaged and shipped off to stores, restaurants, and customers.

Hopefully by learning a little about the cheese making process you will try some new cheeses and maybe even make some of your own! If you do want to make your own cheeses, I highly recommend making queso blanco as your first.