Warning: Parameter 2 to wp_hide_post_Public::query_posts_join() expected to be a reference, value given in /home/customer/www/savoryandsour.com/public_html/wp-includes/class-wp-hook.php on line 308
 Why is Cheddar Cheese Orange? - The Real Reason Skip to content

Milk is white. Cheese comes from milk. Cheese should be white, right? So why is cheddar cheese orange?

There are several theories out there and every cheese expert has his or her favorite. In all of these theories though, the underlying reason is it was/is a way to sell more cheese.

In reality, the real reason why cheddar is orange is probably a mix of all these theories instead of just one. Here are the leading theories and the reasoning behind each. 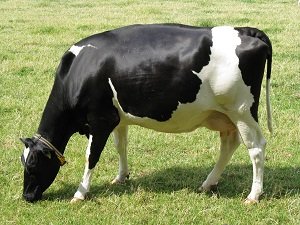 This is probably the most common theory as to why cheddar is orange.

In seasonal Midwestern states like Wisconsin, cow’s diets often change throughout the year. During the summer, they graze on the grasses in the pastures. In the winter when there aren’t any fresh grasses to eat, they are fed grain and hay.

The grasses in these summer pastures contain beta-carotene, an orange-ish pigment present in many plants. Beta-carotene is responsible for giving vegetables like carrots and sweet potatoes their orange color. The carotene from the grass is transferred to the cow’s milk through digestion. The beta-carotene becomes sort of hidden in milk but reappears in butter and cheese made during the summer. 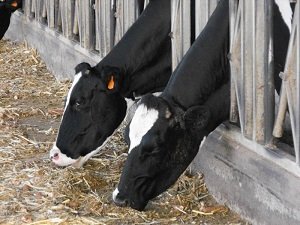 In the winter, cow’s milk contains less beta-carotene due to the lower amounts found in the grain and hay. Cheese made in the winter therefore, will have a slightly lighter color. 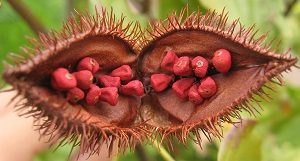 To make cheese a consistent color throughout the year, many cheesemakers add a dye to the cheese during the winter months.

The dye used to make cheddar orange most often comes from the seeds (called annatto) of the achiote tree, which is found in the tropical parts of the Americas.

Way back in the 1600’s in England, many dairy cows fed on grasses that were also rich in beta-carotene. England is where cheddar cheese originated and the cheese makers there became very good at their craft. Cheddar cheese from England became the gold (get it?) standard. 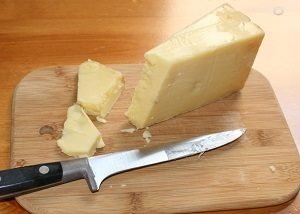 When the newly settled colonies of America learned how to make cheese they started making their own, but they noticed it was whiter than the English cheddar they were used to.

In an effort to sell more cheddar by making their cheddar seem just as high quality as the English cheddar everyone was used to, they dyed it. This was done initially with things like carrot juice and saffron and later with Annatto seeds.

This was definitely a fraudulent practice, but the next theory takes it to a different level.

Back in the 1600’s again, English cheesemakers found out they could get more use from their cow’s milk by skimming the butterfat off. They would then sell this separately or make butter from it. Note that the butterfat, or cream, is what gives the milk its light yellow color.

Well after the butterfat was skimmed off, white, low-fat milk was left behind. This milk was then turned into cheese, albeit very white cheese. Knowing that the yellowish orange hue of English cheddar was a mark of full-flavor and high quality, they dyed their low-fat cheese in an attempt to sell more.

So basically they were selling everyone (unknowingly) low-fat cheddar.

In the late 1700’s when tensions between Americans and the British were high, American’s began boycotting British products. This boycott was one event that eventually led to the American Revolution.

During this time, American cheesemakers were still producing cheese that mimicked the color of the classic English cheddar. At this point the imported cheese sales were non-existent. Not only were Americans not importing British cheese, but they also weren’t consuming it. It’s because of this that American cheddar makers had to make a change.  When the boycotts started, American cheddar makers dyed their cheese in an attempt to differentiate it from British cheddar, which ultimately led to higher sales.

There’s another more local theory similar to this. New England cheesemakers have always preferred to make white cheddar. There’s still a disdain for brightly colored cheeses there today. So when Wisconsin was first settled and local cheesemakers began to make cheddar, they decided to dye it to differentiate it from imported New England cheddar. This was also a marketing tactic to make orange cheddar Wisconsin’s claim to fame and ultimately sell more cheese.

Why is Cheddar Cheese Orange Today? 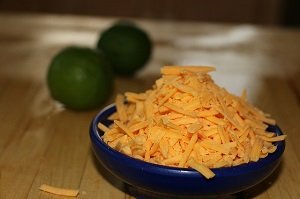 Whatever the theory, at the end of the day cheddar was dyed in an effort to sell more cheese. The tradition has obviously stuck and many cheddars, especially in Wisconsin, are still dyed.

The cheddar, Colby and other orange cheeses you see today though, are far more orange than you could ever get naturally. This leads me to believe at some point cheddar cheeses began to be dyed a bright orange as more of a mark of differentiation than of matching the hue of light golden English cheddar. But those are just my two cents.

I’d love to hear your thoughts and comments on these theories!

10 thoughts on “Why is Cheddar Cheese Orange? – The Real Reason”